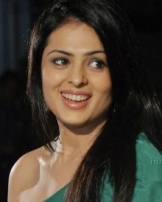 Anjana Sukhani is a Bollywood Indian actress. She belongs to Jaipur and she is 30 years old. She has also acted in a Cadbury Dairy Milk advertisement with Amitabh Bachchan .She's has acted in the long awaited release Golmaal Returns, sequel to the 2006 hit Golmaal.She made an impression in multi-starrer Salaam-e-ishq. She also starred in the lead role for the video for the song 'ghar jayegi'.

Fascinated by the pull of movies, International business graduate holder, Anjana Sukhani put her academic scores in deep freeze to don greasepaint and shine in the arclights. Her hobbies include books, poetry, writing and traveling. She hates it when people lose their temper at her as this makes her nervous. Just as in films, even in real life, she loves an unpredictable script and a man like a prince charming persons. She believes that she is a bubbly girl full of sunshine. This approach holds her in good stead when she is exposed to dark fearful situations. She considers herself to be a Good Samaritan and soul. She always managed to keep a low profile and steal the thunder when least expected by sheer dint of hard work.Her sister Meena Sukhani made her debut in Jaane Tu Ya Jaane Na.