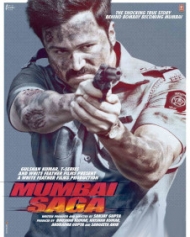 Inspired by true events, as claimed by the makers, Mumbai Saga begins with a dreaded gangster Amartya Rao (John Abraham) gunning down a businessman (Samir Soni) in broad daylight. The film rewinds eight years back where we are introduced to his younger days when he earned his livelihood by selling vegetables at the railway station. His younger brother Arjun is the apple of his eye.


When the lad is hospitalized after a spat with one of Gaitonde's (Amole...