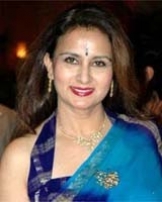 Career
She first gained fame when she was crowned Miss Young India at 16. Famous director Yash Chopra noticed her and gave her a romantic role in the star-studded hit film Trishul (1978) where the famous song "Gapoochi Gapoochi gum gum" was picturized on her with co-star Sachin Pilgaonkar. Enthralled by her performance, Yash Chopra gave her the title role in Noorie (1979), which he produced. The film became a major hit and earned Poonam a Filmfare nomination as Best Actress. It also catapulted her to the ranks of upcoming heroines in the late seventies and early eighties. Subsequently she did about 90 films in Hindi, including Sohni Mahiwal, Red Rose, Teri Kasam, Dard, Nishana, Yeh Vada Raha, Samunder, Romance, Kasam, and Sitamgar.

She did a cameo in the hit film Judai (1996) as a favor to producer Boney Kapoor after Juhi Chawla dropped out. She also ventured out to do regional films such as the Bengali film "Nyay Danda," Kannada film "Yudha Kanda" and Telugu film "Ishtam." She has done Hindi theatre, a super hit comedy play "The Perfect Husband" which won the best comedy play award in 2005 and which recently completed Golden Jublee run. She is currently acting in a play "The Perfect Wife" co-starring Sooraj Thapar

Poonam Dhillon ventured into the make-up van business, pioneering the concept in Indian Film industry, now she runs a successful Make-up Van company, "VANITY ". She has been one of the first to start a personal website in 2000. She has been very active with social causes like Drug awareness, Aids awareness, Family Planning, Organ Donation etc. Poonam Dhillon is the fourth guest to be on Bigg Boss (Season 3) on Colors TV . She was a favorite and most slated to be winner,specially among the women. She became the second runner-up on the show.

Personal life
She married film producer Ashok Thakeria in 1988, with whom she has two children, son Anmol and daughter Paloma. The marriage ended in 1997. Her younger sister Dr. Rishma Dhillon-Pai is a gynecologist based in Mumbai and her brother Dr. Baljinder Singh is a pediatrician.

She has been actively involved in social service,has been offered political seat during elections but till now not accepted but has campaigned during the elections.