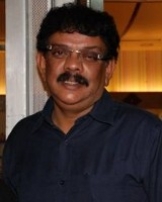 Priyadarshan Nair is a writer and director. He directed numerous commercially successful movies in Malayalam cinema in the 1980s and 1990s. He is one of the directors who brought attractive cinematography and rich background music to Malayalam movies.

Priyadarshan hails from Thiruvananthapuram, Kerala where his father Poojappura Soman Nair, a dramatist of repute in Malayalam, worked as a librarian in a college affiliated to the University of Kerala. Greatly influenced by his father, Priyadarshan developed a reading habit, which he maintained all through his college life.

He had read almost all the works of great writers by the time he completed his college studies. His fascination for comics and fairy tales reflects in his movies. As a child, Priyadarshan aspired to be a cricketer. However, his hopes of a career in cricket were cut short following an injury to his left eye by a cricket ball. He would later wear dark glasses when appearing in public.

Priyadarshan met his wife, Malayalam actress Lizy (actress), on the sets of his second film. They worked together in twelve movies. He has two children, daughter Kalyani and son Sidharth. Megastar of the Malayalam industry Mohanlal is one of Priyadarshan's closest friends. Priyadarshan was Mohanlal's friend and senior in college in Thiruvananthapuram.

Around the same period many of his friends from Thiruvananthapuram joined the film industry. Megastar Mohanlal, singer M. G. Sreekumar, and producer Suresh Kumar are a few among them. Priyadarshan is said to have ventured into films by chance.

His first movie Poochakkoru Mookkuthi in Malayalam was a blockbuster. His success is generally attributed to the new outlook, particularly slapstick comedy which is extensively used in his films. Mohanlal played the lead character in some of his most successful films. Their best work till date has been considered to be Chithram (Malayalam, 1988).

Another movie Kilukkam was one of the biggest hits in the history of Malayalam cinema. In 2003, Priyadarshan remade the film in Hindi, as Muskurahat, starring Jay Mehta, Annu Kapoor, Revathi, Amrish Puri, etc. The film started a long association between Mohanlal and Priyadarshan, which resulted in a number of now-classic comedies in Malayalam, including Kilukkam, Chithram, Vellanakalude Nadu, and Thenmavin Kombath.

He made his second foray into Hindi films with the remake of the acclaimed Kamal Haasan starrer Thevar Magan (Tamil) in Hindi. The film was titled Virasat and was made with the help of writer Vinay Shukla. The success of the film established Priyadarshan as a sought-after director in Bollywood along with the cast and crew of the film including Tabu, Ravi K. Chandran (cinemotography), and Anu Malik (music).

Several critics have pointed out that Priyadarshan relies on plagiarism from other films, particularly critically or commercially successful Hollywood productions. For instance, Thalavattam is heavily based on the Oscar-winning film One Flew Over the Cuckoo's Nest.

Other notable instances include Vandanam (Stakeout), Kakkakuyil (A Fish Called Wanda), Malamaal Weekly (Waking Ned) where he did not even credit its British producer Richard Holmes before lifting its story and Garam Masala (Boeing Boeing).

Incidentally, there is an English film by the name Boeing Boeing released in 1965 with the identical storyline starring Jerry Lewis and Toni Curtis. His Hindi films are mostly remakes of older Malayalam movies, usually of a different director and screenwriter.

The original directors and screenwriters are either not acknowledged in the Hindi version, or are acknowledged simply under 'Story'. For instance, Hulchul was originally written and directed by Siddique-Lal who was not credited as the screenwriter in spite of it being an exact copy (with dialogues translated to Hindi).

Soon after the release of Bhool Bhulaiyaa, in an interview with Rediff.com, the original screenwriter Madhu Muttam claimed that he was not consulted with and the original director, Fazil (also Priyadarshan's mentor) refused to comment on the film.

When asked about plagiarism accusations, Priyadarshan told The Hindu, "Today, 99% of the films are copied". Interestingly, his most popular movies in Malayalam are original - notably Chithram, Kilukkam, Mithunam, Vellanakalude Naadu and Thenmavin Kombath.