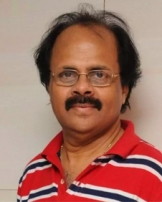 Crazy Mohan is a popular Tamil actor, comedian, screenwriter and playwright. His actual name is D.Mohan Kumar and hails from the village Daamal in Tamil Nadu. He was born on 16 October 1949. He was a student of Guindy Engineering College where he graduated from Engineering (Mech) in 1967. He was president of the College dramatic society. He later founded the popular Drama Troupe 'Crazy Troupe' in 1971 and was its leader and president. Under Mohan, the Crazy Troupe performed over 200 plays across Tamil Nadu- most of the themes involving sattires and witty dialouges.

The Troupes name changed in 1976 to 'Crazy Creations' and in 1982 to 'Crazy Dreams'. In 1988- Mohan founded the prominent production company 'Crazy Productions'. However the Crazy troupe continued to perform until 1994- before they were finally disbanded. Mohan's troupe often competed with S. V. Shekhar's Mylapore Boys Troupe.

In addition to Dramas and Teleserials- he has also worked in a number of comedies especially with Kamal Hassan like Michael Madana Kama Rajan, Apoorva Sagodharargal, Avvai Shanmughi and Panchathanthiram. He has played a small role in each of these films- and has acted or written dialouges for over 70 films including Arunachalam starring superstar Rajnikanth.

His brother Maadhu Balaji is the hero in all the dramas. All the dramas of crazy will have Madhu, Cheenu, Janaki, Mythili and Ramanujam (Character Names). He is famous for spontaneity.

Crazy Mohan passed away at the Kauvery hospital in Chennai on June 10th, 2019. He was 57 and was suffered an acute heart attack.