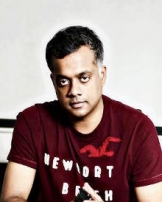 Gautham Vasudev Menon is an Indian film director and producer in Tamil Nadu, India. Many of his films have been critically acclaimed, most notably his action-thrillers Kaaka Kaaka, Vettaiyaadu Vilaiyaadu and Vaaranam Aayiram.

Gautham Menon was born to Keralite father and Tamil mother. He did Mechanical Engineering in Mookambikai College of Engineering in Trichy, Tamil Nadu.

He was an ad film-maker, shooting various commercials after a good apprenticeship under noted filmmaker Rajiv Menon. He worked as an assistant director for Minsaara Kanavu. He also played a cameo role in the film. He started his own ad agency "Photon Factory" before moving to cinema, which is now recognized as a film production company.

His first film was Minnale in Tamil with R. Madhavan, Abbas and Reema Sen playing the lead roles. The film was a huge hit because of its young and peppy story, brilliant comic timing from the acclaimed comedian Vivek and also because of some new lifting music from the then debutante music director, Harris Jeyaraj.

Gautham immediately received the chance to remake the film in Bollywood. He did so, retaining Madhavan in the lead role, this time having Diya Mirza playing the female lead role. Rehna Hai Tere Dil Mein however did not have much success in the Hindi film industry.

Gautham returned to Tamil cinema in 2003 with Kaaka Kaaka, starring Surya Sivakumar, Jyothika Saravanan and Jeevan. Gautham, himself, appeared in a cameo role as a senior police officer. With R. D. Rajashekar on the camera, Anthony in editing and again with Harris Jeyaraj handling the music, the film was a box-office record breaker.

Gautham again got offers from various quarters to remake the film. This time he remade the film in Telugu with Venkatesh in the lead. But the facts reveal that some of the scenes were as is replicated from the English movie Se7en.

After that, Gautham had the opportunity to make another action/adventure-thriller film with Kamal Hassan in a pivotal role. Thus, he started Vettaiyadu Villaiyadu. The unit faced a lot of problems due to the producer's suicide attempt. However they overcame all that and the film was released in August 2006. The director plays a cameo dancing at the back in the song, Manjal Veiyil. The film came to be the biggest grosser of 2006.

Gautham's Pachaikili Muthucharam with Sarath Kumar and Jyothika Saravanan in 2007 was a critically acclaimed flick but it bombed at the box office. His next release, Vaaranam Aayiram with Suriya Sivakumar, Simran Bagga, Sameera Reddy and Divya got released on November 14, 2008. It is claimed as biggest hit of 2008. It has received the National Film Award for Best Feature Film in Tamil for 2008.