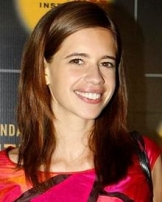 Kalki Koechlin is born to French parents. She is a girl from Bangalore who moved to Mumbai to try her luck in acting.

She has studied drama and theatre at London University and was dabbling in theatre along with modeling. She did a couple of advertisements before landing the unconventional character of Chanda in ‘Dev. D’.

Her parents came to India 38 years ago as “hippies” and remained here as they loved the country. Kalki admits that she is “definitely Indian”. The actress, fluent in French, doesn’t feel French at all, since she stayed in South India right from her birth.

She is tagged as another foreign actress paving her way to Bollywood. Aware of her background, her linguistic shortcomings and her unconventional looks, Kalki knows that she can’t be the quintessential Bollywood heroine who prances around the trees, singing and romancing the hero.

Kalki got her calling in parallel cinema and feels lucky to have worked with Anurag Kashyap in her first movie. The two even fell in love while shooting this film.

She is confident about her acting skills and is hopeful to get some meaningful and interesting roles in Bollywood.