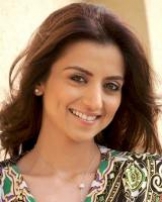 Kulraj Kaur Randhawa is a Punjabi actress best known her role as "Kareena" in the popular TV series Kareena Kareena.

She started her career as a model, and soon after landed the role of the lead protagonist in a show on Zee TV, Kareena Kareena. Her character was loved by people of all age groups, giving her instant recognition.

In 2006 this Sardarni acted with Jimmy Shergill in a Punjabi film Mannat that released on 6 October 2006. She played the role of Prasinn Kaur and Mannat (deceased Prasinn's daughter) in the movie. Randhawa acted in a film called Tera Mera Ki Rishta as Rajjo. She also acted in the movie Yamla Pagla Deewana.