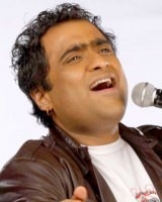 Kunal Ganjawala (Hindi : कुणाल गांजावाला) is an well-known Indian singer, known primarily for his work as a Bollywood playback singer and Kannada film industry. His breakthrough hit, Bheegey Hont from the film Murder, won the 2005 Zee Cine Award for Best Playback Singer (male). He has sung four songs in Saawariya, directed by Sanjay Leela Bhansali, who is his cousin. He has also participated in Sa Re Ga Ma, an Indian singing talent competition on Zee TV (now Sa Re Ga Ma Pa) back in the days when it was hosted by Sonu Nigam. He was recently himself a judge on Amul Star Voice of India, another singing competition on Star TV, which he judges together with Shreya Ghosal and Pritam.

Biography
Kunal Ganjawala is a very diverse singer-cum-performer, who started his career from a singing talent show "SaReGaMa" on Zee television and went on to continue his success in coming years with some really good songs.

Early Life
He has done his schooling from St. Peter's School, Mazagaon.

He says his singing career began in school:
“     I was not even a bathroom singer. I began singing only when I was caught by my seniors as an 8th standard students in St Peters School. I was passing by them whistling a tune when a few of them caught hold of me and commanded, 'Sing a song'. I was shocked. I said I never sang in my life. They said, "Dont lie!". When he can whistle tunes so well, why can't he sing?' They caught hold of my neck saying, they would throttle me if I didn't. With great difficulty I sang Nazar ke samne (Aashiqui) and Ek din bik jayega (Dharam Karam). They spared me then but made me sing in college festivals later.     ”

Personal Life
In 2005, he married to fellow singer Gayatri Iyer-Ganjawala, who is also a very well known playback singer and performer, like Mr. Ganjawala. They have done the playback singing in a few films together in the recent years.

Career
Till now, other than Hindi, He also sang the songs in Kannada, Marathi, Punjabi and Telugu languages.

His Hindi song "Bheege Honth Tere" from Murder, which was a huge hit, has got him a very big success and name in the B-town and all over across the country, which is still continued with several other fabulous performances. This song also won him a several awards in that year, including a Filmfare-Best Male Playback Singer award in 2005.

His song "Channa Ve Ghar aa jaa" from a Punjabi Album "Channa Ve" by DJ Anit was a super hit to add to his fame.

In 2007, he participated in a concert tour in North America, called "The Incredibles", also starring Asha Bhosle, Sonu Nigam and Kailash Kher.

On 3rd April,2009 he performed at RECSTACY, the annual cultural event of NIT-DURGAPUR.