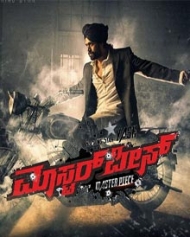 Masterpiece movie is a action thriller film written and directed by Manju Mandavya. In which, Yash and Shanvi Srivastava are playing the lead roles along with Suhasini Maniratnam and Chikkanna, Avinash in supporting roles.
Vijay Kiragandur producing this movie while V. Harikrishna scored music for this movie.
Story
Masterpiece is a simple story of a local riotous hero Yuva (Yash). The story opens up with Suhasini, (Yuva's mother) giving an interview about him to a TV channel. Like every mother, Yuva's mother wants her son to be a welly educated and respected in the society.
Her dream is see her son as a freedom fighter like Bhagat Singh, Chandra Shekar Azad. But, Yuva dislikes his mother's opinion about life and he finds short-cut to become successful and familiar as 'BOSS', a baddie. Yuva becomes a youth icon from his school days and continues to be the same as he grew up.
Impressed with the local power, after winning a college election, Noor Ahmed (Achyuth Kumar), a local politician comes in search of Yuva for seeking support for elections. The story takes a new turn from here, as Yuva joins hands with politicians to become popular in the society. This what happens in the complete first-half of the movie.
The second half of the movie portrays how a local vigorous Yuva connects himself in the drugs mafia don, played by Ravishankar. Apart from the story of action and politics, Masterpiece also portrays a unique love story between Yash & Shanvi Srivastava as Yuva-Nisha. Will Yuva make his mother proud and serve his mother land land as a freedom fighter? For this grab your tickets and watch the movie.
Release
Masterpiece movie is all set to release worldwide on 24th December 2015.