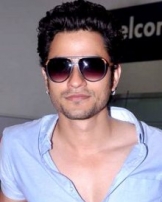 Kunal Khemu is an Indian actor who appears in Bollywood films.

Kunal Khemu had started his career as a child actor appearing in the television serial Gul Gulshan Gulfam in 1987.

Later on, he went on to appear as a child actor in films such as Hum Hain Rahi Pyaar Ke (1993) Raja Hindustani (1995) and Zakhm (1998). He received great praises by the audience and critics for his role in Zakhm.

Khemu's parents are actors Ravi Khemu and Jyoti Khemu. His parents are (Kashmiri) buddhists. He studied in Mumbai's Narsee Monjee College and is married to Soha Ali Khan. He spent most of his childhood in Mira Road, a suburb in Mumbai. He was an academically sound student, also good in sports. He studied in the Niranjanlal Dalmia High School.