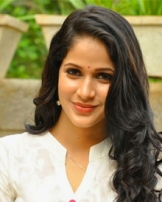 Lavanya Tripathi is an Indian actress. Before starting her acting career, she worked as a model and gained fame after winning the Miss Uttarakhand title in 2006.

Lavanya Tripathi was born and brought up in Uttarakhand, India. Her father is a lawyer and practice in high and civil court. Her mother was a teacher but now she is a housewife. She has two siblings, one brother and sister, both elder than her. She did her schooling in Dehradun and graduated in Economics from National College, Mumbai. She belongs to a Brahmin family.

Making her feature film debut with the 2012 Telugu film Andala Rakshasi, she earned critical acclaim for her performance as Midhuna in the movie. She got great following in Telugu after this movie.