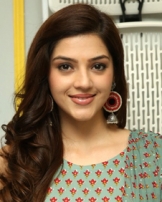 Mehreen Kaur Pirzada is an Indian model and actress who made her debut with the Tollywood film Krishna Gaadi Veera Prema Gaadha in which she was paired opposite Nani. Mehreen made her Bollywood debut with Phillauri in 2017.

Mehreen was born in Bathinda, India in a Sikh family. Her father is an agriculturist, and her mother is a housewife. She has a younger brother, Gurfateh Pirzada, who is also a model and actor.

She did her early schooling in Mayo College Girls School, Ajmer and was the School Students Council Member. Mehreen finished her high school at Pathways World School, Aravali. During her schooldays she rendered her services for the NCC, was an active member of the International Rotary Club and the Vice President at School Interact Club. She is the Silver Recipient through for Gold from Duke of Edinburgh for Adventure and Trekking for her successful attempt to Gomukh. Mehreen is also a trained Bharatnatyam dancer. She has represented India at Young Global Leaders Conference at Washington D.C. and New York City. Additionally, she is a national air pistol shooter.

Mehreen did her first ramp walk at the age of Ten years and won the title of 'Kasauli Princess' at a beauty pageant. She was later crowned Miss Personality South Asia Canada 2013 in Toronto. She modelled for popular designers through Jemini Face Modeling company and acted in many a commercial ads in Canada and India. She is also the Face of Dove India (The Dove Foundation India)(International Print), and endorses Nikon, Pears and Thums Up on TVC and print media.

Mehreen made her debut with the Telugu movie Krishna Gaadi Veera Prema Gaadha in which she played the character of Mahalakshmi. The movie was a big hit in Andhra Pradesh and the US box office. In March 2017, she debuted in Bollywood with the movie Phillauri alongside Anushka Sharma, Diljit Dosanjh and Suraj Sharma. She is currently shooting for two Telugu and one Tamil movie, set to release later this year.