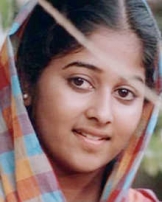 Monisha Unni (Malayalam: മോനിഷ, Kannada: ಮೊನಿಷ) (born: 1971 – death: 1992) was an Indian film actress, primarily of Malayalam cinema, who made her presence known with her very first film. She was only 15 years old when she won the National Film Award for Best Actress for her debut film Nakhashathangal (1986). That made her the only actor to get a National Award for the debuting film and the youngest actor to achieve the feat. She died in a car accident at the age of 21.

Early life
Monisha was born in Kerala in 1971 to Narayanan Unni and Sreedevi. She has a brother, Sajith. Her father Narayanan Unni, hailing from Shornur was in the leather business in Bangalore, Karnataka. Monisha was brought up in Bangalore. Her mother, Sreedevi was a dancer. Monisha started to learn dance since childhood and soon became a danseuse. She did her first stage performance when she was 9. She received the Kaushika Award for winning in the Karnataka state level Bharatanatyam competition in 1985. She completed her schooling from St Charles High School, Bangalore and Bishop Cotton Girls School, Bangalore. She completed her degree in psychology from Mount Carmel College, Bangalore.

Career
Noted Malayalam novelist M. T. Vasudevan Nair, who is also a screenwriter and film director is a family friend of Monisha's. He was responsible for her film entry. She made a debut in film acting with Nakhashathangal (1986), which was written by M.T. and directed by Hariharan. The film portrayed a love triangle involving three teenagers. Monisha was paired opposite another debutant Vineeth, who was to become a famous south Indian actor.

Monisha's portrayal of Gowri, the female protagonist won her the National Film Award for Best Actress in 1987. Monisha proved her performance in her first film was not a fluke with brilliant acting in Perumthachan(1990), Kadavu(1991) and Kamaladalam(1992), which was a Bharath Mohanlal starrer. She also acted in Tamil films Pookkal Vidum Ithal (remake of Nakhashathangal) and Dravidan and in a Kannada film Chiranjeevi Sudhakar(1988) pairing with Raghavendra Rajkumar in the lead role.

Death
Monisha was working for the Malayalam film Cheppadividya when she died. On December 5, 1992, a car carrying her and her mother was in an accident Cherthala, Alappuzha. Her mother escaped with minor bruises, but Monisha suffered a severe brain shock with minor external bruises, injuries from which she died.