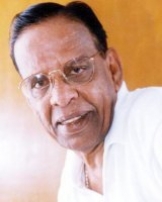 C. Krishna Rao Gundu Rao (September 27, 1933 – January 31, 2009), better known by his screen name Nagesh, was a Tamil film actor, mostly remembered for his roles as a comedian during the 1960s. He is regarded as one of the most prolific comedians in Tamil cinema.

Nagesh was born in a poor Kannada family from Dharapuram, Tirupur. He was educated in Madras and worked as a clerk in the Indian Railways before carving a place for himself in the Tamil film industry. He acted in over 1,000 Indian movies from 1958 to 2008 performing in a variety of roles as comedian, hero, supporting actor and villain. He died on January 31, 2009.

In a stark contrast to the comic roles he performed, Nagesh's personal life was wrought with suffering. After losing his father at an early age, Nagesh had to endure a weak financial situation and family ostracism which plagued him throughout his life. The film Server Sundaram, a rags-to-riches story in which Nagesh plays the main role is believed to be roughly based on the real life story of the actor.

Despite being primarily a comedian, Nagesh was rated highly as a character actor by his peers. Nagesh's style of comedy was largely inspired by Hollywood icon Jerry Lewis. Similarities between Nagesh and Jerry Lewis earned Nagesh the sobriquet "Jerry Lewis of India".

Early life
Nagesh was born as Gundu Rao to Krishna Rao and Rukmaniamma on September 27, 1933. His parents belonged to the Kannada-speaking Madhwa Brahmin community. It is believed that he was born in Dharapuram in Tirupur district. His father died at an early age and the burden of educating Nagesh fell upon his mother. In his childhood, Nagesh was afflicted by small pox which slightly disfigured him.

He left Dharapuram at an early age and moved to Madras city in search of a career. At Madras, he shared a one-bedroom room with two others. His room mates, writer Vaali and director Sridhar, later became established themselves as prominent personalities in the Tamil cine field. He found employment as a clerk in the Indian Railways and was thus able to pay his rent and cope up with expenses.

Early film career
Early in his life, he saw a Tamil play Kamba Ramayanam enacted by his colleagues, and felt that he could do a good job. He persuaded the secretary of the Railways cultural association to give him the role of a man suffering from stomach pain. MGR, then chief guest, seeing this play, in his speech praised Nagesh for his performance. From then onwards, Nagesh played small roles in various drama troupes.

In 1958, producer Balaji spotted Nagesh and gave him his first break in a film called Manamulla Marudhaaram. The film did not do well at the box office. Moreover, Nagesh had only a small role to play in the movie. In 1960, Nagesh made his debut in Kannada with Makkala Rajya.

Nagesh won critical acclaim for his performance in the 1961 movie Thayilla Pillai. But it was his 1962 hit Nenjil Oru Aalayam which launched his career in the Tamil film industry. Nagesh was signed for K. Balachander's Server Sundaram in which he played the main role. The movie was a remarkable hit and launched the career of directorial career of K. Balachander.

Financial stress and decline
Nagesh's career witnessed a decline from the mid-1970s onwards. He was plagued by personal problems. His marriage to a Christian woman named Regina had fractured his relationship with his mother and other relatives. In 1973, his mother died causing him irreparable grief. At about the same time, he had a fallout with Tamil actor and politician M. G. R. who omitted Nagesh from most of his films. Nagesh theatre owned by him in Chennai was on the verge of getting seized for non-payment of dues forcing Nagesh to patch up differences with M. G. R. who subsequently bailed him out. In order to cope up with the changing trends, Nagesh had to switch over to playing character roles full time.

Nagesh acted in a few movies during this period some of which were hits. One of his notable roles was that of a drunkard in the 1974 Kamal Hassan-starrer Apoorva Raagangal where he talks to his own shadow and hurls the empty glass upon it while saying "Cheers". In the theaters where the film was shown the audience imitated him and threw cups on the wall of the lobby during interval. He played the role of writer Jayakanthan in the 1977 movie Sila Nerangalil Sila Manitharkal . Nagesh appeared as himself in Thillu Mullu, the Tamil remake of Golmaal.

Resurgence
Nagesh's career enjoyed a partial resurgence from the 1980s onwards when he acted in a number of movies, mostly in elderly roles, some of them as the villain. His most remembered role as a villain was in the 1989-hit Apoorva Sagodharargal. The movie was later dubbed into Hindi as Appu Raja. He also played the villain in Rajinikanth films Athisaya Piravi and Mounam Sammadham. His negative roles included sadistic schemers then muscular giants.

In the comedy flick, Michael Madana Kama Rajan, Nagesh played the role of a dishonest secretary Avinashi who commissions a look-alike Kameswaran to impersonate his boss, Madan, and lend him money from Madan's account. He even acted as a dead body in the 1994 film Magalir Mattum. He won a National Award as Best Supporting Actor for his role in the 1994 film Nammavar

Nagesh did a series of supporting roles in the 1990s and 2000s. Notable among them were those of make-up artist Joseph in Avvai Shanmugi in which he featured alongside another veteran Gemini Ganesan, Arjun's father in Rhythm, Madhavan's grandfather Subbuni in Minnale, Ajit's Grandfather in Poovellam Un Vasam, Father Rozario in Kadhal Kondain and Kamal Hassan's father in Vasool Raja MBBS. His handling of these roles gained him considerable appreciation from the public.

Nagesh had an intimate personal relationship with Kamal Hassan, with whom he had co-starred in a variety of movies from the 1970s to the 2000s. Kamal Hassan cast Nagesh in most of his self-productions.

Later Years
Nagesh acted in Tamil films till a few months before his death in 2009. Notable among some of his later movies were Panchathanthiram in which he played Yuhi Sethu's father-in-law, a memorable cameo as Kamal's father who gets humiliated in Vasool Raja MBBS and Mokkappayar in Imsai Arasan 23m Pulikesi. His last completed role was that of Sheikh, father of Kalifullah Mukthar in the 2008 movie Dasavatharam.

Death
Nagesh was a chain smoker and a heavy drinker. His health began to decline in late 2008 due to heart ailments.

He died on 31 January, 2009 at the age of 75 due to diabetes and a heart ailment while he was admitted in Balaji Hospital.

His final rituals is attended by all major film actors like Jayalalitha, Kamal Haasan, Rajini Kanth, Manorama, Venkataramani, V.S.Raghavan, Y.G.Mahendran and many more.