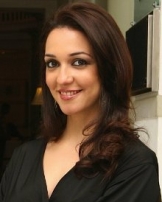 Nauheed Cyrusi is an Indian model, a VJ and actress of ethnic Parsi and Iranian descent. She was born on 19 October 1982.

She studied in J.B. Vacha School, and graduated from Jai Hind College and Basant Singh Institute of Science, Churchgate, Mumbai, and pursued M.Com through correspondence.

Nauheed originally wanted to take to traveling by becoming an Air Hostess, but after modelling for three years, she decided to be part of show-business; the other reason being she is too short and scared to work in aeroplanes.

While in school, she accompanied her friend to an audition and at the age of 14 she appeared in an advertisement for Dhara Refined Oil. Subsequently, she went on to appear in Head & Shoulders, Britannia Little Hearts Biscuits, Ayurvedic Concepts (now Himalaya) advertisements.

Nauheed started her career as a model, featuring in many music videos. Piya Basanti being a memorable one, which brought her to the attention of Bollywood producers. Nauheed has appeared in many advertisements on television as well as the print media.

Her face was associated with EverYuth Orange Peel-Off Skin Vitaliser which made her a craze among girls across the country.

She made her film debut in Padam Kumar's Supari, starring Uday Chopra and Rahul Dev. While the film flopped, director Vikram Bhatt chose her for Inteha opposite Ashmit Patel. She was recommended to Director Padam Kumar by Channel V's VJ, Purab Kohli, with whom she had worked on Zee TV's 'Hip Hip Hooray'.

She also played a small role in the youth-oriented tele-series Hip Hip Hurray. She also acted in a Telugu movie called Sakhiya with Tarun. She made an appearance at the India Fashion Week 2007 as well as the Allen Solly Fashion Show, along with fellow actress Koel Purie.

Her release in April 2007 was Life Mein Kabhie Kabhiee, which also stars Aftab Shivdasani and Dino Morea. She will also be seen in ADA...A Way of Life, which is an A.R. Rahman Musical and Meeting Se Meeting Tak, which also stars Dino Morea and Priyanka Sharma.

She was one of the contestants on "Khatron Ke Khiladi - Level 2" the Indian version of Fear Factor. She reached the top 5 but eventually got eliminated after failing a car stunt.

She was seen in the movie released in August 2009 Kisaan, also starring Jackie Shroff, Sohail Khan, Arbaaz Khan and Diya Mirza. She played opposite Sohail Khan as a girl named Titli from a village in Punjab. Her next release was an English language film,"Rockin' Meera" directed by Param Gill.

She played the title role of Meera and the film was a commercial and critical success in the United States. She was seen in Main Aurr Mrs Khanna in a supporting role as Nina, Kareena Kapoor's character, Raina's best friend. She has also appeared in Kurban which was released in 2009, starring Kareena Kapoor and Saif Ali Khan.