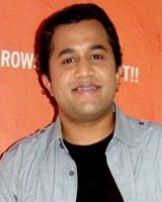 Omi Vaidya is an Indian American actor who is best known for his performance as Chatur Ramalingam or "The Silencer" in the 2009 Bollywood film, 3 Idiots. In addition, Vaidya has directed two short films and worked as an editor on others. He has also appeared in a number of television programs and commercials.

Vaidya was raised in Joshua Tree in Yucca Valley, California. He graduated from the Los Angeles County High School for the Arts and later University of California, Santa Cruz for two years. He then attended the Tisch School of the Arts at New York University, graduating with honors.

After college, Vaidya began to work with an agent and received small roles in television programs, Marathi dramas and commercials. After receiving a small role in Arrested Development, he was also asked to audition for the role of Sadiq for The Office (U.S. TV series) by the same casting director. He portrayed Sadiq in two episodes, E-mail Surveillance and Fun Run.

Vaidya's most notable performance is in a supporting role in the 2009 Bollywood film, 3 Idiots as Chatur Ramalingam (or "The Silencer"). He received strong reviews for his performance. Vaidya auditioned for the role of Chatur while on a trip to Mumbai. After passing the first audition, he was asked during the second to read dialogue from Lage Raho Munna Bhai.

Vaidya states that he "just rattled it off without exactly understanding the words ... almost like the speech scene in [3 Idiots]." After being hired for the part of Chatur, he was told not to study Hindi, not to watch Hindi films, and to gain weight. Of his success in the film, Vaidya credits the atmosphere of the cast and crew stating that in Mumbai there is "a personal touch, unlike Hollywood.

Even if they don’t pay you by the hour and there is no extra time, there is warmth and care. I basically saw my Bollywood innings as a challenge. A lot of credit also goes to Raju and Abhijat Joshi for the way the character came across on screen." He was also discouraged from providing interviews prior to the film's release.

Vaidya states: "Before the film released, I asked director Rajkumar Hirani if I could give a couple of interviews. He stopped me saying nobody knew me and I should wait till the film is released. My role was a surprise they had planned for the audience." Vaidya later recalled that, "When I was at the premiere of 3 Idiots, no one recognised me. I was a bit depressed but when it got over, it was difficult for me to even get out of the theatre. I have been enamoured by the love and appreciation I have received from the audience Today, when I go out on streets, people come and shake hands with me… It feels nice."