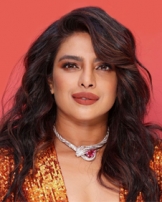 Priyanka Chopra is an Indian actress and a former Miss World, born at Jamshedpur, Jharkhand. Priyanka was born to Ashok Chopra and Madhu Akhauri, who are physicians. She has a younger brother. She spent her childhood in Bareilly, Uttar Pradesh; Newton, Massachusetts; and Cedar Rapids, Iowa.
She went to La Martiniere Girls' School in Lucknow. Then she relocated to the U.S. where she went to Newton South High School in Newton, Massachusetts and then to John F. Kennedy High School in Cedar Rapids, Iowa. After this she returned to India and finished her high school at Army School in Bareilly. Next, she joined Jain Hind College in Mumbai, but left after winning the Miss World pageant.

Priyanka made her debut in 2002 with the Tamil film Thamizhan. Then in 2003 she debuted in Bollywood with the film, The Hero: Love Story of a Spy. It was the highest-grossing film of the year. Then she appeared in the film Andaaz which was a success at the box office. For this film, she won the Filmfare Best Female Debut Award and a nomination for the Filmfare Best Supporting Actress Award.

Then in 2004 she starred in films like Plan, Kismat and Asambhav which did not do very well at the box office. Later that year she acted in a movie called Mujhse Shaadi Karogi which was the third highest-grossing film of that year. Then she starred in Aitraaz where she played a negative role. It was a hit movie and she received the Filmfare Best Villain Award for playing the role. She also received a second nomination for the Filmfare Best Supporting Actress Award.

In the year 2005, she had six flops, including Blackmail, Karam, Yakeen and Barsaat. After this she acted in two films, Waqt: The Race Against Time and Bluffmaster which went well at the box office. Then in 2006, she starred in two successful films, Krrish and Don - The Chase Begins Again. In the year 2007 she acted in two more films, Salaam-e-Ishq: A Tribute To Love and Big Brother which flopped at the box office.

Then in the year 2008, she starred in Love Story 2050, God Tussi Great Ho, Chamkua and Drona which again flopped at the box office. Then she starred in Fashion, which was a success. She received several awards for this film, including the National Film Award for Best Actress and also the Filmfare Best Actress Award. Later that year she was seen in another film, Dostana which was again a success.

Priyanka Chopra and Nick Jonas entered the wedlock on Dec 1, 2018.