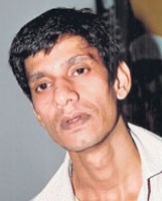 Vijay Raaz is a Bollywood actor. His breakthrough hit came when he played the role of Dubeyji in the movie Monsoon Wedding. Since then, Raaz has been cast in small, often comedic roles, in many Bollywood movies, often depicting the character of a common man. His first mainstream movie cast as the leading actor was Raghu Romeo, a box office success where Raaz depicts the life of a confused lower-class Indian fellow.

Raaz was arrested in Dubai in February 2005 for the possession of drugs.