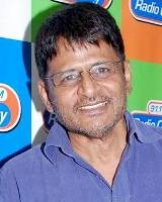 He spent the early years of his life in Jabalpur, a city in Madhya Pradesh. He ran away from home and joined the Parsi Theatre Company at the age of fifteen. He later moved to Delhi, where he joined the National School of Drama (NSD), graduating with a Specialization in Stagecraft in 1977.

Raghubir Yadav performed as an actor and singer in over 70 plays and about 2500 shows, travelling in Caravans, living in tents and performing on makeshift stages in various villages, towns and cities of India.

He made his film debut with Massey Sahib (1985) in which he played the title role. Incidentally, he has never won the National Award but Two International Awards as Best Actor for Massey Sahib, FIPRESCI Critic's Award, Venice Film Festival, 1986 and the Best Actor Silver Peacock, IIFI, 1987. The film also starred the noted writer and social activist, Arundhati Roy.

He was seen in many milestone films in the coming decades. Three films that he has acted in have received Academy Award nominations for Best Foreign Language Film (Salaam Bombay!, Lagaan, and Water). Raghubir Yadav is the only Indian actor to have received the Silver Peacock Best Actor Award, at the International Film Festival of India. His most acclaimed role was as the drug addicted "Chillum" in Salaam Bombay! (1988).

Yadav started his television career with the TV series Mungerilal Ke Haseen Sapne (1990), playing the lead character 'Mungerilal'. Later he played the roles of Haji Nasruddin in the series Mulla Nasiruddin and the lead in Chacha Chaudhary. He also played the lead role for BI T.V. in Arjun Pandit.

He composed music for Ghasiram Kotwal, Chotte Sayeed Bade Sayeed, Chaupra Kamaal Naukar Jamal, Chacha Chaudhary, Ballet for Song and the Drama Division. He composed and sang for the Maggie Mania and conceived, wrote and composed the Ramlila for Dilli 6.