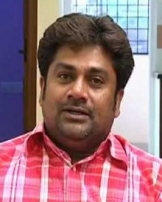 Rangayana Raghu is an Indian film and stage actor, known for his work in Kannada cinema. Portraying mostly comic and negative-shaded characters, he has appeared in over 250 films. Prior to acting in films, he worked as a stage actor with B. V. Karanth's theatre group Rangayana, from 1988 to 1999.

Rangayana Raghu is most noted for his performance in the 2007 blockbuster Duniya, which starred Vijay. He also got the Karnataka State Award for Best Supporting Actor for the same movie. He went on to act in several movies, which include hits like Gaalipata, Junglee, Milana, etc. He also acted in a lead role in the movie Aithalakkadi, in which he shared screen space with Bullet Prakash.