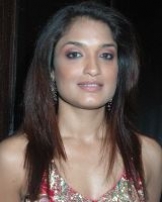 Sandhya Mridul is an Indian actress who appears in Bollywood films and television, most known for her roles in movies like Saathiya (2002) and Page 3 (2005), and was first runners up in the reality dance show, Jhalak Dikhhla Jaa (Season 2) in 2007.

Mridul, affectionately called 'Sandy', was born in Mumbai to Advocate P. R. Mridul and his wife. Later, the family moved to New Delhi. At age ten, she left home to attend school at Maharani Gayatri Devi Girls’ Public School in Jaipur. At age 14, her father, a lawyer by profession and later a judge of the high court, died and she was brought up by her elder brother Justice Siddharth Mridul who is a sitting judge of Delhi High Court. She also has another elder brother named Pankaj.

She graduated in mathematics, did her post graduation in marketing and went on to do a corporate job with KLM in Mumbai.

She first arrived back in Mumbai to be a marketing executive. Mridul first started her career with the popular TV serial Swabhimaan. After that, additional roles followed in serials like Banegi Apni Baat, Koshish and Hu Ba Hu.

She made her breakthrough in films with Yash Raj Films, in Saathiya in 2002. The film was critically and commercially successful and critics appreciated her performance. Her character Dina was an important supporting role that got her noticed. She also appeared in Extraa Innings, the programme during the Cricket World Cup 2003.

In 2004, she acted in Pratap Sharma's "Zen Katha", a play based on the life of Buddha in Mumbai opposite Rajeev Gopalkrishnan. Her show, Koshish Ek Asha in which she played the role of the female protagonist has been dubbed in Chinese and in the year 2005, it was telecast in China. Through this show, Sandhya became a household name in China in 2005.

She decided to walk away from Television soap Operas because the roles felt repetitive. Of her decision to quit TV, she remarked, "If you want to play the protagonist these days, you have to be the bahu. I’m not ready to do that again. I can’t be wearing heavy saris with dark pink lipstick all my life."

In 2005, she starred in Page 3 with Konkona Sen Sharma and Tara Sharma. She played an air hostess in the film. Her performance was again praised by the critics and the film was a hit at the box office.

Since 2006, she focused exclusively on film roles. She played Maya, a restless soul who keeps on moving in and out of things in an off-beat film called Strings. She also acted in 13th Floor, which is an interesting story of two people stuck in the 13th floor of a lift.

As a trained Bharatnatyam dancer, Sandhya's desire to show her dancing skills was also fulfilled in the film Chowki. In Honey Moon Travels Private Limited, she played a wife stuck in a marriage with a gay man. In the thriller Deadline: Sirf 24 Ghante by Tanvir Khan, she acted with Irfan Khan.

Her versatility and her penchant for taking non-conformist roles have made her a darling of cross-over films. She proved her talent again in another off-beat film called Via Darjeeling in which she played an alcoholic. "I would like to step into the shoes that Smita Patil left behind", said Mridul about where she sees herself in the Bollywood acting space.

She has also been judged the runners-up at the popular dance show Jhalak Dikhhla Jaa (Season 2). This decision did court some controversy since one of the judges, Urmila Matondkar declared that Mridul should have won. There were also allegations of rigging and interference on the decision to declare Prachi the winner of the show.

Mridul said of the decision, "Don't tell me that I lost. Like I have said before, you lose only when you lose heart, and I haven't. I may have only lost out on a trophy and cash but I have won many hearts."

In 2008, she served as a member of the jury in the 14th Television Festival held in Shanghai. She was the youngest and lone Indian at the festival.