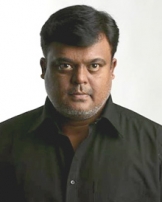 Sharath Lohithaswa is an Indian film and stage actor and the son of Kannada artist Lohithaswa. Educated in Bangalore and originally rooted as a theatre artist, he has performed in television series including Chidambara Rahasya (scripted by Late Poornachandra Tejaswi directed by Girish Karnad) broadcast in DD Chandana and Kichchu (directed by K.M. Chaitanya) in ETV Kannada.

He has several Kannada films to his credit and has earned a good name as one of the fine actors in Kannada cinema. His roles in Aa Dinagalu (2007), Sanju Weds Geetha (2011) and Bheema Theeradalli (2012) are well known across Karnataka. He played several kinds of roles in Kannada movies. He is noticed in the South Indian film industry, mainly for his villainous roles.

Not many know that he is also a good singer. He has sung in several dramas in which he has acted. He considers theatre as the root of all creativity and performance. He had his debut in Tamil with a decent role in Ethir Neechal as a caring father and a menacing villain in Pandianadu as Simmakkal Ravi.