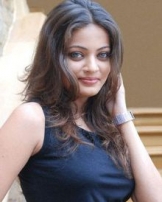 Sneha Ullal is a Bollywood, Tollywood and Kollywood film actress.

Sneha Ullal was born on December 18th, 1987 in Muscat, Sultanate of Oman. She is a Mangalorean born of Indian origin parents. Her father, Nitin Ullal is the general manager of a reputed construction company in Oman and stays there, while Sneha and her mother moved to Mumbai.

Sneha Ullal studied at Durelo Convent High School in Mumbai and later studied at MMK College, where she befriended Arpita, her college mate and the younger step-sister of Bollywood actor Salman Khan. The friendship led to the chance meeting with Salman Khan, who was greatly impressed by her charm and look-alike beauty of Aishwarya Rai. Thus was launched her movie career.

She has said that she would love to co-star with Rajinikanth, if she got a chance to.