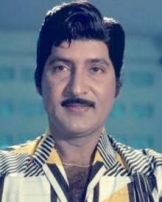 Sobhan Babu was a Tollywood film actor. Born as Uppu Sobhana Chalapathi Rao to a middle-class family, Sobhan went on to become a romantic icon and was the top Tollywood hero for two decades. He made his film debut with Daivabalam directed by Vasanthkumar Reddy, but his first film to hit the screens was Bhakta Sabari.

Background
The son of Uppu Suryanarayana Rao, Babu had three sisters Dhanaranga, Jhansi and Nirmala, and a brother, Sambasiva Rao. Babu completed his initial schooling in Kuntamukkula Mylavaram. He pursued his Intermediate in Vijayawada and finished his degree at Andhra-Christian College in Guntur. Later, he studied law in Chennai, but ultimately discontinued it.

He married Shanta Kumari on 15 May 1958; they had a son, Karuna Seshu and three daughters: Mrudula, Prashanti and Nivedita.

Babu's first film was Bhakta Sabari. Chitrapu Narayana Murthy was his first director. His film Manushulu Maarali ran for 25 weeks which was a record at that time. His first colour film was Kannavari Kalalu.For the first time he went abroad for a film shooting for Ramudu-Parasuramudu. He made a dual role in Potti Pleader for the first time.

He was honored with several Nandi Awards by the state of Andhra Pradesh. He was given the honorific, "Natabooshana", which became his last name in movie credits.

During the 1970s he was also linked romantically to Jayalalitha who later went on to become the Chief Minister of Tamil Nadu. In reply to a report in a 1978 issue of the Bombay-based Star and Style magazine, implying that she and Shobhan Babu had parted ways, Jayalalitha confirmed that the relationship was strong and they were "going steady".
Check Out The Biography Of J Jayalalitha

Career
Sobhan Babu made his debut in the film Daivabalam.  After that he acted in many films playing small roles.

Veerabhimanyu (1965) was his first movie as a "solo hero". This movie turned out to be a big hit. However, he still played small roles in many films in order to earn money for his family. After the huge success of Manushulu Maarali, he acted in films until 1997.

The highlight of Shoban Babu's career was the three consecutive Film Fare awards he won between 1974-1976 (1974 - Khaidi Babayi, 1975 - JeevanaJyothi, and 1976 - Soggadu). This was a record for the Telugu film industry. Babu was only the second actor (after Dilip Kumar) to receive three consecutive Filmfare trophies.

His rise in the acting industry was also a boon to producers with Babu's successive hits including Veerabhimanyu, Manushulumaarali, Kalyanamantapam, and Tahsildhargaari Ammaayi, which earned Babu a large fan base.

Sobhanbabu had paired up with Sarada for several films and they were a hit pair. It was a unique combination. Sobhan Babu known for his glamour and Sarada for her outstanding, performance-oriented roles.

Though several senior artists had lost their earnings either by producing films or in some other way, Sobhanbabu had a planned career. He invested all his earnings in real estate. After his retirement he lead a peaceful life with a complete happy family with sons, daughters, sons-in-law and daughters-in-law and grandchildren. At the end of his career, he chose some character artist roles and finally retired from films.

Controversy over Sobhan Babu death Sobhan Babu passed away on March 20, 2008 due to a heart attack.

In a startling turn, comedian-turned-politician Babu Mohan alleged that Sobhan Babu did not die a natural death, but was pushed to death.

In his interviews on and after Thursday Feb 26 2009, Babu Mohan has said that on the fateful day, Sobhan Babu had a quarrel with his family members over a cheque book. In some clashes related to finances, they pushed him down a flight of stairs causing injuries to his nose and head, resulting in his instantaneous death. Babu Mohan has alleged that the family members managed to show it as a natural death.