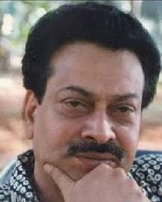 Sukumaran was a popular film actor in Malayalam cinema from the early 70s to the mid 90s. Sukumaran's portrayal of an "angry young man" in many films gave him a huge fan fare especailly during the 70s. He is also noted for his villain roles mostly done during the 80s.

He died on June 16, 1997 Thiruvananthapuram, India

Early life
Sukumaran was born at Edappal as the elder son of Parameshwaran Nair and Subhadramma. He had a brother and two sisters. Sukumaran concentrated on his studies in the earlier days. He earned a job as a college lecturer after completing his Masters degree.

Career
During his tenure in English at Scott Christian College, Nagercoil, (the veteran actor Madhu  also took to acting while working in the same college) he got an offer to act in the Malayalam movie Nirmalyam, directed by M. T. Vasudevan Nair. He accepted the role of a defiant youngster in the film. The film went on to win accolades from all over and won a couple of National Film Awards as well.

Despite being noted as a talented actor, Sukumaran didn't get any offer for some time after Nirmalaym. He was thinking of returning to the teaching profession, when he was offered a role in Shankupushpam. With that film, Sukumaran carved a niche for himself in the Malayalam film industry. He then went on to act in meaty roles in films like Avalude Ravukal, Angadi, Bandhanam, Etho Oru Swapnam, Manasa Vacha Karmana, Ahimsha, Spodanam, Salini ente koottukari, Angakkuri, Kolilakkam, Theekkadal, Sandarbam, Witness, and Kottayam Kunjachanan.

His role as a defiant police police officer in Oru C.B.I. Diary kurippu and its sequel Jagratha, directed by K. Madhu was noted for its characterisation and earned cult status when the third sequel to the series Sethuramaiyer C.B.I. had Saikumar portraying the son of the police officer, with the mannerisms and voice tone of Sukumaran.

Sukumaran won the Kerala State Film Award for Best Actor in 1978 for his role in Bandhanam. Sukumaran married actress Mallika Sukumaran. They have two sons, both malayalam filmstars in their own right: Indrajith Sukumaran and Prithviraj Sukumaran. Sukumaran had his own production company called Indraraj Creations. The company produced acclaimed films like Irakal and Padayani. The film Irakal, directed by K. G. George was selected for the Indian Panorama in the IFFI. His last film was Shibiram, directed by T.S. Suresh Babu. This gifted actor breathed his last on 16 June 1997.