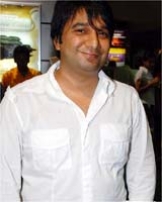 Ahmed Khan is an Indian choreographer, producer, actor, director and writer. Khan began as a child actor playing small roles in films like Raakh. He played an orphan boy in his debut film, Mr. India and worked as the choreographer's assistant in Anjaam. He choreographed for films such as Rangeela, Taal, and Ghajini. Khan made his directorial debut with the 2004 film Lakeer – Forbidden Lines starring John Abraham.

In 2007, he released Fool n Final, a comedy with Sunny Deol and Shahid Kapoor. He produced and wrote the script for Paathshaala in 2010.

He is a childhood friend of actor Shahid Kapoor who he has choreographed for and directed in many films. He lives in Andheri with his wife Shaira and their two sons.

Khan has escaped from death narrowly twice: once he filmed a movie at the Twin Towers only two days before the September 11 attacks; the second time he cancelled his reservations at the last minute at a hotel that was destroyed in the 2004 Tsunami.