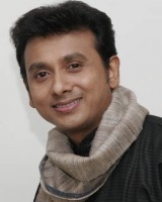 P. Unnikrishnan is a Carnatic vocalist and a national award-winning playback singer.

He went to Asan Memorial Senior Secondary School, Chennai, in 1983. He graduated from Vivekananda College, Chennai, and received his B. Com degree from the Madras University. He earned a General Law and Post Graduate Diploma in Personnel Management and Industrial Relations.

He worked as an executive in Parrys Confectionery Ltd. from 1991-94 and left to become a professional singer.

He is a national award-winning playback singer. He was one of the permanent judges on the reality television show Airtel Super Singer, which was aired on Vijay TV in both the seasons (2006 & 2008) and in the 2008 Idea Star Singer on Asianet.

Unnikrishnan also became famous for his experimental work. In 2008, he presented a novel jazz concert in Trivandrum with the Eli Yamin Jazz Quartet and pianist Anil Srinivasan.

He is married to Priya, a Bharatanatyam and Mohiniyattam dancer. He has a son named Vasudev Krishna and a daughter named Uthra. He is a member of the Madras Cricket Club and a Life Member of the Tamil Nadu Cricket Association.