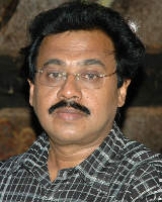 Vinayan is an Indian film director, mainly of Malayalam movies. He started his career with the film Super Star, in which he used a Mohanlal look-alike in the lead role.

In 2005, Vinayan created history by writing and directing the film Albhuthadweep (Wonder Island) which cast around 300 midgets for the first time in a film. The two-foot-high hero of the film Ajayan(Undapakru) found place in the Guinness Book of Records and India’s Limca Book of Records. The film was immensely successful, especially among children, besides garnering the FilmFare and the Cinema Express awards. The film was successfully remade in 2007 in the Tamil language by Vinayan himself. Albhuthadweep is expected to be remade in Hollywood by Ron Howard.

Vinayan has also remade a few of his films into Tamil. He is also a script writer and lyricist.

Vinayan is the founder/president of the MACTA Federation. He has also launched a co-operative society (with the assistance of the Government of Kerala) for the benefit of film workers. Vinayan is also the Advisory Member of the Cine Workers Welfare Board, sponsored by the Government of India