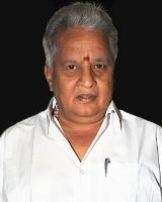 Visu is a Tamil writer, director, stage, film and television actor and talk-show host from Kalakad, Tamil Nadu. Visu fine tuned his directorial skills under the mentor-ship of legendary K Balachander until becoming a full-fledged director.

He ventured into acting in his self-directed Tamil film, Kudumbam Oru Kadambam meaning family is a mixture, which was a talk of the period for its crisp storyline, sensitive story, sensational dialogues and timed jokes. Further on, he directed films like Samsaram Adhu Minsaaram, which was remade in almost all Indian languages based on a short story, Thirumathi Oru Vegumathi, Manal Kayiru, etc.

A philanthropist, Visu had been supporting the needy through his own foundation. The programme on Jaya TV "Visuvin Makkal Arangam" had been serving for a genuine cause since its inception. The same type of programme Arratai Arangam was hosted by him on Sun TV. Though he could serve through a registered foundation, he had been using the programme as a tool/media to reach the common man.