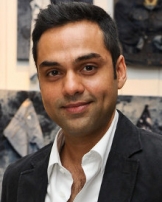 Abhay Deol is the son of producer and director Ajit Singh Deol. His paternal uncle is famous veteran actor Dharmendra and his cousins are actors Sunny Deol, Bobby Deol and actress Esha Deol.

He made his film debut in the 2005 film, Socha Na Tha which was produced by his uncle. The film got him good reviews for his performance but it did not do well at the box office. His second film was Ahista Ahista in 2006 which was also a box office flop but got him good critical reviews.

His first 2007 release was Honeymoon Travels Pvt. Ltd. which has a multi star cast and has emerged to be his first major box office success. His second 2007 release was Ek Chalis Ki Last Local which did average business at select multiplexes.

His third film in 2007, Manorama Six Feet Under released on September 21, 2007 and was a disaster at the box office but won the Best Film at the Mahindra Indo-American Arts Council Film Festival in New York City.

His only 2008 release was Oye Lucky! Lucky Oye! which became extremely popular. He also trained to become a deep-sea diver for his 2011 film Zindagi Na Milegi Dobara.