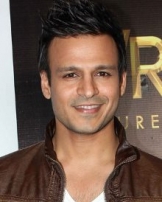 Vivek Oberoi was born on September 3, 1976 in Hyderabad to Bollywood actor Suresh Oberoi. He attended Mayo College in Ajmer. He is a true devotee of Lord Aiyyappa and has been going to Sabrimala for the past couple of years. At an actors' workshop in London he was spotted by the director of NYU who encouraged Vivek to join New York University, where he then completed his master's degree in film acting.

His big break came when filmmaker Ram Gopal Varma offered Oberoi a role in his gangster flick, Company (2002) which went on to become a commercial success and Oberoi received critical acclaim for his performance.

Vivek Oberoi debuted in Ram Gopal Varma's film Company, which was a huge commercial success. He received Filmfare Awards for the Best Debut as well as the Best Supporting Actor. He then starred in action films, Road and Dum.

Next, he starred alongside Rani Mukerji in Saathiya (2002) directed by Shaad Ali, which went on to become a blockbuster. He also starred in the successful comedy Masti (2004) along with Aftab Shivdasani and Ritesh Deshmukh. In 2004, he starred in the very successful and critically acclaimed film Yuva.

In 2006, he appeared in Omkara, an adaptation of Shakespeare's play Othello. He played the character of Kesu based on the character Michael Cassio in the original play. In 2007, he acted as the gangster Maya Dolas in the multi-starred Shootout at Lokhandwala.

In 2008, Vivek Oberoi starred in a film called Mission Istanbul which was directed by Apoorva Lakhia and produced by Ekta Kapoor. In 2009, he co-starred alongside Saif Ali Khan and Kareena Kapoor in Kurbaan.

Oberoi serves as the World Health Organization's anti-tobacco spokesperson. He is involved with several charities in Chennai and Mumbai. His work with Project Hope to bring relief to the victims of the 2004 Indian Ocean tsunami earned him a Good Samaritan Award from Rotary International.