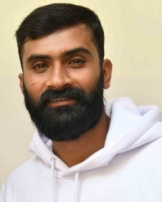 Yogesh is a popular Kannada film actor. Yogesh is the son of film producer Siddaraju. After giving a short role of loose maada in the film Duniya, he became popularly known as Loose Maada. He is the nephew of another popular Kannada actor Duniya Vijay.

Yogesh has made his debut as a hero in Hrudaya I Miss You directed by Satya. As a solo hero, his first movie was Nanda Loves Nanditha, which was a sensational hit all over Karnataka. Now, he is currently a busy actor with a huge fan following among the youngsters and teenagers.