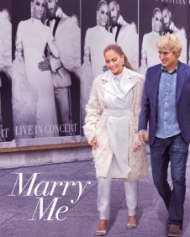 Comedy Drama Romance
Release Date : 2022 (India)
11 Feb 2022 (WorldWide)
Cast : Owen Wilson, Jennifer Lopez
Director : Kat Coiro
Synopsis
Marry Me is an American romantic comedy-drama directed by Kat Coiro. The film stars Jennifer Lopez in the lead role and Owen Wilson, Maluma, John Bradley in supporting roles. It is based on the comic of the same name.
Plot: A famous Latin pop star Kat Valdez learns that her on-stage partner has been having an affair behind her back. She ends up marrying a stranger named Charlie Gilbert when she was holding a "Marry Me" sign at her live concert.