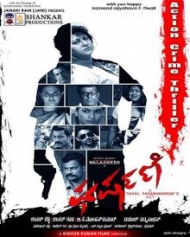 U/A | Action
Release Date : 03 Jan 2014
Cast : Malashri, Ashish Vidhyarthi
Director : Dayal Padmanabhan
Synopsis
Gharshane movie is a commercial crime thriller. Action queen Malashri will be seen as Central Crime Branch (CCB) officer and handling the undercover operation in the movie.
Apart from Malashri, Gharshane also features Roopika, Suchendra Prasad, Ashish Vidyarthi, Pavithra Lokesh and Ravishankar in the significant roles.
Story In detail:
The plot deals with the story of CCB Officer Netravathi (Malashri), who will be in the mission of searching her younger sister Anjali (Roopika). Anjali is the victim of live sex scandal, which will be the biggest challenge for government. Nethravathi finds out the involvement of senior Police officers in scandal, and in the due course she will have many clashes (Gharshane) with her own...