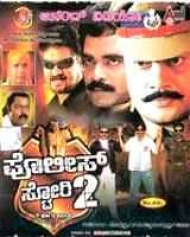 Action
Release Date : 09 Feb 2007
Cast : Saikumar, Rockline Venkatesh
Director : Thriller Manju
Synopsis
Police Story 2 is a sequel to the film " Police Story" released in the year 1996. The previous film ends with the announcement of death sentence to Black Tiger. In "Police Story 2" the main character of this film Agni gets promoted as D.C.P and continues his fight with yet another gang of criminals. Thimmakka (Sana ), Dharmaraju ( Jeeva ) and Sathya are the leaders of this gang.

Thimmakka's son gets killed in the hands of Agni. Burning with vengeance, She ropes in Black Tiger to take vengeance on Agni. During the hanging process Black Tiger deceives the police and escapes from there. Agni starts to kill the members of the gang one by one and finally goes to Bangkok in search of Black Tiger.