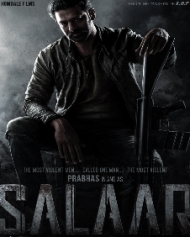 Salaar is a action thriller movie directed by Prashanth Neel. The movie casts Prabhas and Shruti Haasan are in the lead roles. The Music composed by Ravi Basrur while cinematography done by Bhuvan Gowda. The film is produced by Vijay Kiragandur under Hombale Films banner.
Salaar is a Pan India movie releasing in various languages.