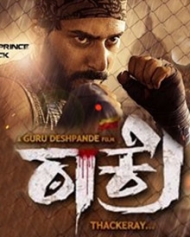 For the first time Prajwal and V Ravichandran are pairing for this movie.

Director Guru Deshpande clarifies that film was titled as Thackeray because director found this name to be powerful and also he thought this title would be apt for his script. The movie is based on mafia in a particular region.

Prajwal will play the character that will have a grey shade and apparently this will be not a regular hero role which we get to see in commercial entertainers. Also, he is undergoing a makeover for the film.

Ravichandran, is playing an important role of a godfather...