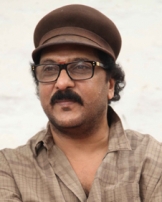 V. Ravichandran is an actor, director, producer, music director, and lyricist in the Kannada film industry. He is the son of film producer N.Veeraswamy. As producer, Ravichandran continues to run his father's production house, Sri Eswari Productions. He is popularly known as "Crazy Star" Ravichandran, a title fans have prefixed to his name.

Ravichandran shot into instant fame when Prema Loka, which he produced, directed, and starred in the lead role became one of the landmark films in Kannada film history. It was made with a budget of 1 Crore Rupees, the most expensive Kannada film in its time. It starred Juhi Chawla as the female lead.

Premaloka also established Hamsalekha, who would teamed up with Ravichandran for a long period & gave consistently good music for the next 10 years.

Ravichandran has had a chequered career spanning more than two decades as actor, director, producer, music director, and lately, as a lyricist.

As the leading actor, Ravichandran's initial movies were box-office failures characterized by weak storyline, and poor direction. His major commercial success as the leading actor prior to Premaloka was Naanu Nanna Hendthi, a comedy starring Urvashi in the female lead role.

Ravichandran is considered a mediocre actor but a talented technician. However, his role as a mentally challenged adult in Ramachari won him critical praise. He has stuck to mostly stereo-typed roles, a police officer (Shanti Kranti and Abhimanyu), lover boy (Prema Loka, Anjada Gandu, and Preethsod Tappa), pop singer (Yuga Purusha, and Gadibidi Ganda), rustic (Sipayi, Halli Meshtru, and Malla), and lawyer (Yudha Kaanda). He continues to act and has a few projects awaiting release.

He is known as a non-conformist, and created his own style of film-making. Most of his movies show very little influence of other directors except Premaloka, which contains traces of Grease 2. Notable aspects of his film-making include a curious combination of close-ups, abrupt fast-cuts, and innovative camera angles.

He is renowned in the Kannada film industry for his understanding of the technical aspect of cinema. His movies are lavishly mounted and stand out for superior production values distinguished for cinematography, sound, lighting, and special effects.

A distinct directorial feature is his innovative shooting of songs. With song-picturization in movies Ravichandran has directed often in elaborate and richly-mounted settings.

Ravichandran initially acted in and directed movies produced by his own banner, Eswari Productions. After Premaloka, he accepted acting offers from other producers. He has worked with leading directors of the Kannada film industry such as S.V. Rajendra Singh Babu, and D. Rajendra Babu.

Ravichandran, is known to be a perfectionist and artists recall him shooting a single scene/sequence, until it is perfect. He is known to have shot entire sequences again after the first cuts of the movie failed to satisfy him. However, after a lean patch in the late 90s, Ravichandran is said to have made amends to this and churned out quickies.

A major complaint his fans have is that in the last decade most of his movies have been remakes of Telugu or Tamil hit movies. He seems to have lost originality after Premaloka.

Ravichandran is known to produce very expensive movies in an industry that has a limited market. Premaloka was the costliest movie in its time. Although his later films were comparatively less expensive, their budgets exceeded that of other Kannada films by several lakhs of rupees.

In 1991, Ravichandran released Shanti Kranti, the costliest movie ever to be made in Kannada till then. Considered his magnum opus, the film was shot over four years with a budget of 40 Million Rupees, and was simultaneously made in Kannada, Telugu, and Tamil. Shanti Kranti turned out to be a huge failure at the box office.

Ravichandran also released Ramachari the same year. Made with a modest budget, Ramachari ironically, became one of the biggest blockbusters of the year.

After a series of flops and public spat between long time associate music director Hamsalekha, Ravichandran took up the role of a music director and has given a few fine tunes in Ekangi and Aham premasmi. But critics generally consider him an average music director.

Ravichandran is generally credited with introducing a culture of producing big-budget films in Kannada. His other notable contribution includes introducing an innovative approach to direction and film-making.

Ravichandran is also credited with "discovering" the talented Hamsalekha. Together, they worked in over 50 films and created several popular numbers. Music was one of the strengths of Ravichandran's movies. However, the duo parted company after Preethsod Thappa, only to work again in Ondagona Baa, which was a commercial and musical failure.

The music rights of Premaloka fetched a great dividend to Lahari recording company. His association with Hamsalekha led to chart-buster songs in almost every movie. Inspired with this, Ravichandran started his own Audio company, Eswari Audio.

He would take an even greater risk, for his brother's debut movie Aham premaasmi. He bypassed the entire music industry and sold the music-cassettes through Cable-Operators to beat piracy.

In spite of many businessmen creating new avenues of sales in Kannada films, Ravichandran showed that there are still many innovations left to be explored.