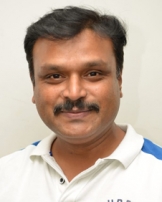 Sridhar V. Sambhram is an Indian film score and soundtrack composer and lyricist in the Kannada film industry. Sridhar made his film debut in the 2008 musical blockbuster Mussanje Maathu, for which he received critics and masses appreciation. Since then he has composed and scored background music for successful films like Krishnan Love Story (2009), Krishnan Marriage Story (2010), Dubai Babu (2013), Jai Lalitha (2014) to name a few. He considers senior musician Hamsalekha as his mentor.