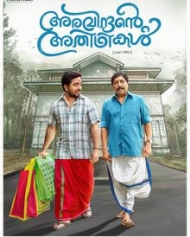 Aravindante Athidhikal is a 2018 Malayalam comedy movie, which has been directed by M Mohanan. The movie stars Vineeth Sreenivasan, Sreenivasan, Aju Varghese & Salim Kumar in the lead roles.

The story of Aravindante Adhithikal surrounds around a person named Aravindan, who is the manager of one of the lodges situated in Kollur, Mookabika. Aravindan, who was abandoned by his mother while he was a kid, was brought up by Madhavan, the lodge's owner.

The film takes us through Aravindan, Madhavan and the some of the guests who arrive at their lodge.