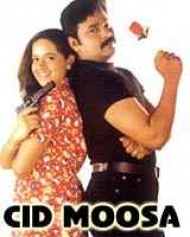 C.I.D. Moosa movie tells the story of Moolankuzhiyil Sahadevan (Dileep) who is a son of a police constable Moolankuzhiyil Prabhakaran (Oduvil Unnikrishnan), whose ambition is to become a police officer like his dad. But, Peethambaran (Jagathy Sreekumar) his brother-in-law does not like the idea and sees that Sahadevan does not clear his physical test.
But one of his uncle advises Sahadevan to become a private detective and rechristens him as CID Moosa!.