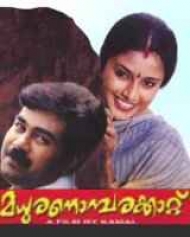 U | Drama
Release Date : Sep 2000
Cast : Biju Menon, Samyuktha Varma
Director : Kamal
Synopsis
Madhuranombarakattu movie  begins with Vishnu (Biju Menon) who is a schoolteacher, getting transferred to a distant village. Before he proceeds to join duty, along with his little son Unni (Master Aswin Thampy) and daughter Maya (Baby Manjari), he goes to meet his wife Priyamvada (Samyuktha Varma), who's serving a jail sentence.

Later, while on the way to the new village, a tragedy befalls upon the family and Unni is killed in a bus accident. Vishnu is in a dilemma, whether to inform his wife or not. He decides not to until she is released months later. The only person who knows Vishnu and his wife in the new place is his close friend Shekaran Sreenivasan) who is a teacher in the same school.