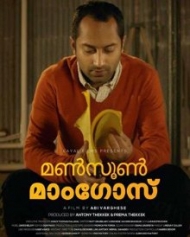 Mansoon Mangoes is a malayalam comedy movie directed by Aby Varghese, in which Fahadh Faasil and Iswarya Menon plays the lead role.

The 2.23 Mints of movie trailer hints that movie is all about the journey of a young director to make his dream project. The film was originally intended to have the title Bourbon Street, which was later changed to Njan D P Pallikkal and finally to Monsoon Mangoes.

Movie is produced by Thampi Antony under the banner of Kayal Films. Music work of the movie is by Jakes Bejoy whereas cinematography is handled by Lukasz Pruchnik.