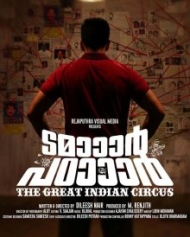 Tamaar Padaar is a satirical Comedy film, scripted and directed by debutante Dileesh Nair, who is a script writer and has written scripts for movies like Salt And Pepper, Da Thadiya and Idukki Gold. All the movies are emerged as a box office hit.

After portraying some intense roles of police officers with a serious outlook, Prithviraj is all set to be a part of a fun filled movie in which he will enact a character named Pouran who is an SP, whose main intention is to capture the notorious criminal Sukumara Kurup.

Baburaj, Chemban Vinod and Srinda Ashab are the other main characters. In Tamaar Padaar prithviraj is using Trivandrum dialect. M Ranjith is producing the movie under the banner of Rejaputhra Visual Media. Bijibal is composing music for the lines of Rafeeq Ahammed.