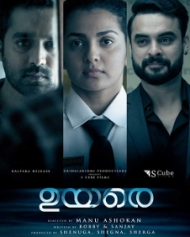 U | 2 hrs 5 mins | Drama Thriller
Release Date : 26 Apr 2019
Cast : Parvathy, Asif Ali
Director : Manu Ashokan
Synopsis
Uyare is a Malayalam drama-thriller movie, helmed by Manu Ashokan, the former associate of late director Rajesh Pillai. In Uyare, Parvathy will be seen playing the role of an acid attack. Uyare, which is scripted by Bobby-Sanjay duo, will also feature Asif Ali in a key role. Pallavi (Parvathy Thiruvothu) is a highly ambitious young woman who aspires to become a pilot. She is in a relationship with the bossy, abusive Govind (Asif Ali), who tries to control every aspect of her life. Pallavi pursues her dream despite the disapproval of Govind, which enrages him. Her life takes a U turn after Govind attacks her with acid to take revenge. Pallavi's struggles to overcome the trauma and lead a normal life forms the crux of the story.