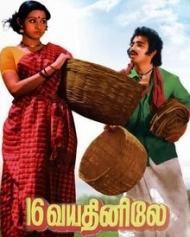 U | Romance
Release Date : Apr 1977
Cast : Kamal Haasan, Rajinikanth
Director : Bharathiraja
Synopsis
16 Vayathinile is a Tamil feature film directed by Bharathiraja.The film stars Kamal Haasan, Sridevi and Rajinikanth. The film's score and soundtrack are composed by Ilaiyaraaja. The film marked Bharathiraja's debut as a film maker/screenwriter and it met with a strong critical reception upon release.

It was also Rajinikanth's first colour film. This is the first film which changed the melodrama of Tamil movies of shooting inside the studios and sets. This movie was completely shot in outdoor locations and marked a new era in Tamil Cinema.