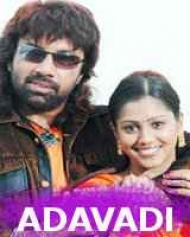 Comedy
Release Date : 30 Mar 2007
Cast : Sathyaraj, Radha
Director : Bharath Henna
Synopsis
Adavadi movie is the remake of kannada movie 'A'. In which Sathyaraj is a film director.who pays great attention to his work. A short tempered person, he lives and breathes cinema. A debut making actress (in the film's story) falls in love with him. After some days she gets away from him. But he is loving her alot. They both will unite or not forms the rest of the story.