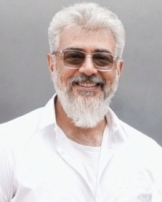 Ajith Kumar's a Tamil film actor and car racer, born as the middle child in Hyderabad to a Tamil father and a Sindhi mother. He has acted in many Tamil, Telugu, and Hindi movies. However, he has strong ties to the Tamil culture and society, as he grew up in Chennai, Tamil Nadu. He dropped out of Asan Memorial Senior Secondary School in 1986 to become a part-time two-wheeler mechanic and a full-time garment exporter based in Erode until 1990. Several business agencies pushed him into modelling for advertisements in print media.

Ajith began dating his Amarkalam co-star Shalini in 1999. They both married in 2000 in Chennai, where they invited many other Kollywood actors and actresses, including Rajinikanth, Kamal Haasan, Joseph Vijay, Surya Sivakumar, and R. Madhavan. On January 3, 2008, the couple were blessed with a baby girl, Anoushka Kumar. On March 2, 2015, their second child, a son, was born.

Ajith is an ardent car racer; he has also participated in various races like the Formula 2 Championship, the 2003 Formula Asia BMW Championship, and many races abroad.

Ajith started his film career at the age of 21 as an actor in the Telugu movie Prema Pustagam in 1992. His next film was the super-hit Tamil film Amaravathi. His second Tamil film, Pavithra, was delayed for 17 months because of a racing injury that left him bed-ridden. Both films received vast appreciation from the Tamil audience. It was his third Tamil film that released 10 months later in 1995; Aasai, directed by Vasanth and produced by Mani Rathnam, helped establish his career as an actor in Kollywood.

Ajith's first big-budget venture was Aasai, but it was only until the release of Agathiyan's blockbuster Vaanmathi, and particularly the National Award-winning Kadhal Kottai, that he was established as an actor in Kollywood. Ajith later played the lead in Amitabh Bachchan's debut Tamil production, Ullasam. This venture paid him a salary of over Rs. 1 million for the first time ever.

A string of very successful movies followed, most notably Kadhal Mannan and Vaali, which cast him alongside Simran. Vaali saw a new peak in Ajith's career. He played a dual role in the film. One is a deaf-and-dumb twin who lusts after his naive brother's wife. After Amarkalam with his then-fiancee, now wife, Shalini, Ajith set up his own distribution company, AK International, with the office located within the premises of NIC Arts, which was run by his ex-friend, producer, and distributor, S. S. Chakravarthi. This office was shifted in 2006.

In 2000, Ajith was cast alongside Mammooty, Abbas, Tabu, and Aishwarya Rai in Kandukondain Kandukondain. The film's audio rights were sold for a record of Rs. 66 million. Mugavari followed as Ajith acted alongside Jyothika Saravanan.

In 2001, Ajith played the role of Shahrukh Khan's brother in the commercially unsuccessful historical film Asoka. He began the year with the scintillating movie Dheena, directed by A. R. Murugadoss. This movie showed Ajith as a rowdy, and he acted alongside Suresh Gopi and Laila Mehdin. Citizen opposite Vasundhara Das was experimentally successful and earned the actor a lot of appreciation and awards, but the movie failed to make its signature mark at the box office. Citizen was followed by Poovellam Un Vaasam, which was also an average grosser.

The films Raja, in which he starred alongside Jyothika Saravanan, and Red, an action film, were disasters for the actor and marked his downfall as well as an all-time low in his career.

In 2003 and 2004, Ajith acted in Anjaneya, Jana, and Attagasam. While Anjaneya and Jana flopped at the box office, Attagasam became a hit, also providing a successful soundtrack album. He later went on to act in the film Ji, which opened very well but failed to sustain success in the long run.

During 2006, Ajith worked on three projects. First, he acted in Paramasivan, directed by P. Vasu, and then in Thirupathi, directed by P. Perarasu. Both were hits. Later that year, he released his three-year-pending project, Varalaru: The History of the Godfather, directed by K. S. Ravikumar. Varalaru turned out to be a super-hit movie in terms of box office due to the three roles he played: an old man who was once a classical dancer and two identical twins, with one being the antagonist.

Ajith's first film was with newcomer director Chella in his 2007 debut film, Aalwar, 2007. Aalwar did not live up to the expectations created by the success of Varalaru. As a result, it was a major letdown for Ajith. After Aalwar, Ajith acted in a remake of a 1989 National Film Award-winning Malayalam film, Kireedam, with Trisha Krishnan.

Billa released a new album on December 14, 2007, breaking all of his previous records. The movie was a remake of Rajinikanth's 1980 Tamil film Billa. In 2010, his next release, Asal, arrived, but it did not turn out to be a hit. In 2010, he started working on the movie Mankatha under Venkat Prabhu's direction, and this movie brought Ajith Kumar his best-ever opening in his career and went on to become a financially successful venture as well.