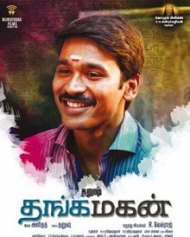 Thanga Magan is a family - entertainment movie direction by Velraj. VIP team rejoined again for this this movie. The movie has Dhanush, Amy Jackson, Samantha and Sathish in the lead roles. Anirudh done music for this movie. Full Cast & Crew Details
Story
Thanga Magan Plot: Dhanush, an average looking boy from a simple family background, falls head over heels in love with Amy Jackson. He manages to woo her and subsequently indulges in a thrilling love life.
However, his happiness doesn't last long as Amy walks out of his life, leaving him dispirited. What follows is an attempt by the director to narrate the difference between love before and after marriage. While Dhanush, along with his family, leads a peaceful life, due to a certain turn of events Dhanush's father (played brilliantly by KS Ravikumar) faces a grave situation, which in turn disrupts Dhanush's daily life.
How Dhanush's saves himself and his family, forms the crux of Thanga Magan to be watched on big screen.
This movie was called as VIP 2 at the stage of shooting, later officially christened as ‘Thanga Magan’.  The movie first look & title was revealed on Dhanush's son Yatra's birthday (Oct 10, 2015).
It should also be remembered that Thanga Magan is a yesteryear film of Superstar Rajinikanth.
Click Here To Read Thanga Magan Live Report From Audience
Releases
Thanga Magan‬ trailer to be unveiled on Dec 10th and movie scheduled to release on Dec 18th, 2015. The soundtrack of the movie was composed by Anirudh Ravichander and it has been released on 27 November 2015.